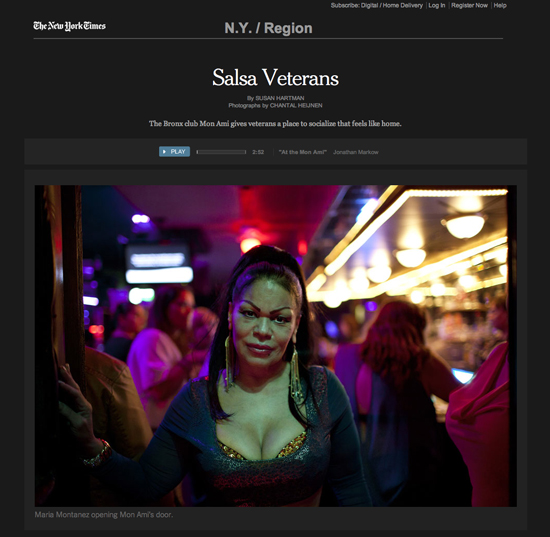 The Bronx club Mon Ami gives veterans a place to socialize that feels like home.

The night starts slowly at Mon Ami, a Bronx salsa club that caters to veterans. The band doesn’t come on until midnight. Louis Rodriguez, 72 silver-haired and fit dances by himself, then catches the eye of a woman in a sequined dress. Leonor Guerrido, 57, starts putting out trays of chicken, next to her birthday cake.

German Rivera, 70, who was stationed in Germany in the 1960s, leans against the bar. Sometimes I don’t come here for six weeks, he says. Then I come to socialize, shine a little.

Mon Ami was started by Hector Cruz, 69, a Vietnam veteran, who bought the small lounge on East Tremont Avenue in 1992. Most of our clients were Puerto Rican veterans, he said. I decided, let’s make this a place where veterans can come and enjoy themselves. A private club since 1998, it is affiliated with the National Congress of Puerto Rican Veterans. But we tried to make it community-oriented, Mr. Cruz added. It is also for their families, friends, and neighbors.

Mon Ami is close-knit: Longtime members greet one another like family. I don’t have to play a part, said David Beauchamp, 65, a veteran.

When members show up in uniform, there is pride. We just grabbed them, Lissette Lorenzo, 52, said, recalling the soldiers and veterans at her husbands 40th birthday party, took them onto the dance floor.

At 3:30 a.m., Mr. Cruz locks up. Everybody leaves together. Sometimes, a couple slips in before the band quits. If I’m at another club, having a boring time, Mr. Beauchamp said, I turn to my wife and say, Let’s go to Mon Ami for the final dance.